Blackstone Tunnel is the sixth area in Cactus McCoy 2: The Ruins of Calavera. In this area and onwards, all types of Enemigos are 50% more resistant.

The most distinctive feature of this area is that it starts with Cactus McCoy riding on an elevator, and he already has a weapon (which is a first in a Cactus McCoy game). In this section, McCoy also has to avoid TNT barrels. However, when the elevator section is finished, McCoy continues to go through the area with normal platforming methods.

When riding the elevator, go as far left as possible until up against the wall when you reach the second section. You should notice soon an Iron Crate on the other side of the wall, along with a TNT barrel under it and a hole in the wall. Shoot through the hole to hit the barrel and make it explode. This will drop the crate. Then, when the section is finished and McCoy lands on the ground, go right an drop through the floor when you see the spot. Go left, then hop up on the crate and go all the way up on to make your way to the treasure. After you get to the top, go right across the ledges to the treasure. After you get the treasure, you may enjoy a long fall.

At the end of the first section, you will need a bazooka or any explosive type of weapon for this. A pistol enemy will be on the hill. Kill him and shoot at the top of you or jump up and throw exploding weapon and a barrel rocket will fall down. grab it and go to the right and there's the third treasure

About halfway through the second section, you will see a large group of blocks and TNT barrels blocking an area off.  Throw TNT through a gap in the wall to destroy the blocks, then drop down into the area.  You will see two pressure switches and an iron crate inside. Pick up the crate, leave the area, and go back to the left. You will see two more pressure switches on the ground. Drop the crate onto one, then stand on the other. This will release another iron crate from an upper ledge. Take both crates and bring them back into the area, then set them onto the switches to open a trapdoor between them. Drop down through the trapdoor to get the chest.

Right before you get to the Enemigos, there are some platforms that are down at first. Slide a mine cart through a tunnel that is too small for Cactus McCoy to fit through. This will trigger a button that will raise up the platforms. Jump up on them and follow more platforms until you get to a rope. Climb across the rope to Chest 5. 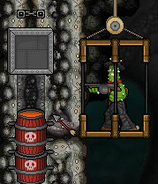 The spot where the crate is for Chest 1.
Add a photo to this gallery
Retrieved from "https://cactusmccoy.fandom.com/wiki/Blackstone_Tunnel?oldid=12309"
Community content is available under CC-BY-SA unless otherwise noted.