Start a Wiki
Chicken is an animal in the Cactus McCoy universe which McCoy can lift. When a chicken is idle, it walks left and right on the platform it stands and it does not do anything to hurt McCoy.

As McCoy carries a chicken, he can float in the air for a while if he jumps and goes toward any direction.

All chickens in the Cactus McCoy universe have white feathers, just like that of the real world's.

Hits it takes to kill each type of Enemigo (Cactus McCoy 1).Edit 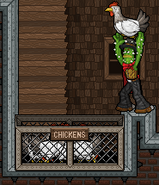 McCoy prepares to throw the last Chicken into the pen.
Add a photo to this gallery
Retrieved from "https://cactusmccoy.fandom.com/wiki/Chicken?oldid=12103"
Community content is available under CC-BY-SA unless otherwise noted.