Ella Windstorm is a female and the last member of the ancient Volados tribe. She has debuted as the main protagonist (alongside Cactus McCoy) in the second game and there, Ella prevents Cactus McCoy from getting a treasure. Being the last of the Volados, she is the only person left that can break the magic seal to the vault of the Serpent Blade. In the same game, Ella is soon abducted by Malana Mire, whom McCoy needs to defeat to finish the game. At the end of the game, she can be seen smiling on Malana's boat behind McCoy.

Except for her purple and blue wings under her arms (which is a distinctive feature of the Volados race), she entirely looks like a human being. She has purple and blue hair and goggles over it. She wears a green scarf over her neck. In the title card of the game, it also seems that she has a sword, as there's a pocket of it in her pants. Other than this, her other clothes somewhat resemble a gladiator's, as there are brown pads over her bare shoulders.

Ella is kind and good-hearted. Like McCoy, she too is fearless but while McCoy quickly jumps to an adventure, Ella seems to be more careful about it.

Ella Windstorm is a Wild West treasure hunter with striking blue wings and hair to match. Her winged lineage traces back to the ancient Volados, who once inhabited the fabled city of Calavera. Along with gliding, her heritage also allows her to break mystic seals that protect her ancestors’ ancient treasures. 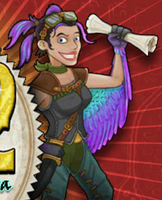 Ella in the title card of Cactus McCoy 2

Ella as she is just about to be captured by Malana Mire in the intro to Cactus McCoy 2. 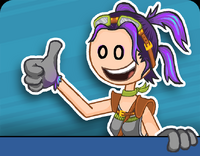 A fanart of Ella in which she is drawn in the style of Papa's Eateria games. Ella raising her thumb (the sign of "like" in Facebook) is a reference to how Flipline Studios had drawn the actual Eateria customers in the same way on their website to promote their Facebook page.
Community content is available under CC-BY-SA unless otherwise noted.