Flipline Studios is an American-based flash game development studio in Cleveland, Ohio that is best known for the flash game series Papa Louie's Pizzeria and Cactus McCoy and The Curse of Thorns. It is co-founded by Tony Solary and Matt Neff in 2004. From 2004 to 2006, the studio was initially named Flipline IDS, where "IDS" stood for "Interactive Design Studios"

Beginning from April 2012, Flipline Studios also started to develop applications for tablets and smartphones, while also continuing their series of free online games. The prices of these applications range from  0.99$ to 2.99$.

List of games that have been developed by Flipline Studios so far are:

Games made by Flipline Studios mostly received positive reviews from players as well as flash game review websites like Jay Is Games and FlashMush. Furthermore, both Cactus McCoy and Papa's Freezeria have been nominated for the award "Best of 2011" from Jay Is Games and the award went to the former. Jacksmith, which was released in October 2012 too won the "Best Game Art" award in the fifth Flash Gaming Summit in 2013. The summit was presented by Mochimedia, which was also the sponsor for the games Papa's Burgeria and Papa's Taco Mia!. by Flipline. 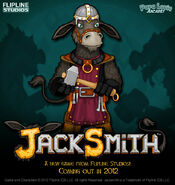 A poster for the preview of Jacksmith.
Add a photo to this gallery

Retrieved from "https://cactusmccoy.fandom.com/wiki/Flipline_Studios?oldid=12317"
Community content is available under CC-BY-SA unless otherwise noted.