Start a Wiki
Powderkeg Pass is the fifth area in Cactus McCoy and The Curse of Thorns. It most presumably takes place in the hills, as the player usually goes up. The TNT barrels are most commonly found in this area.

Upon seeing a third metal ball, there will be a Throwing Enemigo on a very small platform above it. To the left is a series of ladder rungs leading up. Beside that is an arrow sign pointing up. Jump off the platform, holding down the left arrow key to keep McCoy against the wall. You will land on a small platform with first Chest.

After climbing the first set of ladder rungs in the first section of the area, hop to the platform to the right. Then hop up to the next platform, and then the next, defeating Enemigos along the way. Hop and grab onto the single ladder rung above the gap, then jump over to the platform. You will notice that there is a section of this platform where the background is different. Press the down arrow key and A to fall through it, but not while up against the wall, as this is too far over and will make you miss the platform below. The picture to the right shows the correct spot to fall through at.

Just after exiting the Bottomless Gorge, which you had to cross mostly via ropes and ladder rungs, you will be in the section of the area beside it. As you are about to exit this section (after defeating Enemigos and working your way upwards), stop and turn left. Now, you should be on the last platform in this area, the one with the exit to the right. Go left, and jump up onto the platform, defeating Enemigos along the way. Hop down to the far off one, making sure you get as much distance in this jump as possible. Then jump up to the platform beside it. Make another long jump to a platform a little-bit down. Jump across the three thin platforms, then across two more. Your last jump will take you to a ledge with the third Chest.

Like starting out for Chest 3, start at the last platform of this area. Hop down to the left platform. You will see a rope below you; fall down and grab onto it. Then fall down to another rope, then another, and then another (note: stay to the far-left of the ropes). You should be on top of or beside a metal ball. To your right is a small wall, and on the other side of it is a sign that says "Bottomless Pit". Grab the ball, jump up, and through the ball onto the platform the rope above you is connected to. Jump up again, grab the rope and jump on the platform with the ball. Pick it up and run right, into another room. In it you will see a ladder, drop the ball beneath it. Stand on the ball and then jump up and grab onto the ladder. Make your way to the top of the ladder, and jump to the right, onto a platform with the fourth Chest (and a TNT barrel).

After the final fight with the Enemigos in the closed-door section, bring a TNT barrel as high to the right so as to reach the wooden grip. Then take the boulder, found to the right of the area, and bring it back here and throw it to the upwards ledge. Then climb on the boulder and jump to catch the rope and go left from there. 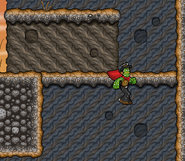 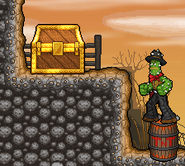 Chest 5
Add a photo to this gallery
Retrieved from "https://cactusmccoy.fandom.com/wiki/Powderkeg_Pass?oldid=12206"
Community content is available under CC-BY-SA unless otherwise noted.