Prickly Prairie is the fourth area in Cactus McCoy 2: The Ruins of Calavera. It is where the player fights Alpaca Jack, the first boss of the game.

Locations of the treasures: Edit

The second Chest is quite easy to reach as well. Progress through the second room/section of the area until you find the first Barrel Rocket. Pick it up, but instead of normally going left and through the breakable blocks, turn to the right. Don't worry about the crusher, it appears as though McCoy is immune to it when riding barrel rockets. Angle McCoy's flight path upwards as well so he lands on the platform (not changing his path will put him on a collision course with the platform).

Note: You will need Fuse Bombs or some other explosive weapon to get to this Chest. Fuse Bombs can be found in various places in this area, so make sure to grab a set before heading off for this Chest. Chest three is in the same room/section of the area as Chest two. To make describing it's location easier, stand near the end of this room/section of the area, at the part just before where you walk into the third room/section of the area. Go right until you reach a pole with a ladder rung at the top. Jump onto the platforms to the left of it, and then right, grabbing onto the ladder rung. Jump right, and you should grab onto a rope. Climb across, and drop down onto the platform with the Yellow Shooting Enemigo and breakable blocks. Dispatch the Yellow Shooting Enemigo if you haven't done so already, and use your bombs to destroy the blocks. Only a few steps to the right is the third Chest.

Chest four is in the third room/section of the area. Upon reaching the first Barrel Rocket (as well as only accessible one on foot, so you shouldn't be able to confuse it with others) in the room, grab it. It will carry you up and onto a platform with another barrel rocket. Ride this one to the left. On yet another platform with a barrel rocket, grab this one to go up. This time you will soar to a ledge with the fourth Chest.

Note: Alternatively, if you have explosives, bomb the first crumble blocks you see in the ground towards the left side of the area. You can then drop down to what is normally the last Barrel Rocket required to reach the chest, and ride it up to the chest.

Note: You will need Fuse Bombs or some other explosive weapon to get to this Chest. Fuse Bombs can be found in various places in this area, so make sure to grab a set before heading off for this Chest.

Note: If you don't have any explosives and really don't want to restart the level to get them, go back to the first barrel rocket in this room/section of the area (under the two ladder rungs). Grab it, but as soon as you do, throw it to the right. Repeat this until you can get it down onto the ground with the wall of breakable blocks. Grab the rocket while up against the wall and hold the left arrow key down. This will cause McCoy to steer into the wall as the rocket takes off, destroying it. Go back and do this again with the same barrel rocket (it re-spawns), although continue to the left of where you destroyed the wall until you reach the second one. Steer to the left into this one as the rocket takes off as well, destroying it. Grab the chicken and follow the steps listed in the previous paragraph to get to the fifth Chest. 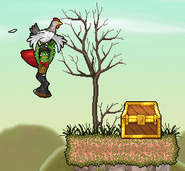 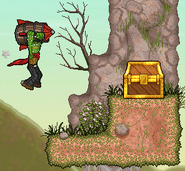 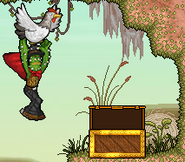 Chest 5.
Add a photo to this gallery
Retrieved from "https://cactusmccoy.fandom.com/wiki/Prickly_Prairie?oldid=12279"
Community content is available under CC-BY-SA unless otherwise noted.