Start a Wiki
The Revolver is a basic shooting weapon in both Cactus McCoy games. Even though it's basic, it's still better than a Derringer, as it can shoot 6 bullets at a time while a Derringer can shoot only 2.

In Cactus McCoy and The Curse of Thorns, the weapon makes its first appearance in Rustler Railroad, the 3rd area. In Cactus McCoy 2, however, it makes its first appearance in the very first area of the game (which is Tumblewood). In the same area, a Revolver replaces the darts from the first game in the Tutorial section. Another interesting fact about the Revolver in the same game is that it is dropped by Alpaca Jack during the boss fight with him, which is a first in a Cactus McCoy game.

A Revolver is a bigger pistol than Derringer. This difference obviously appears when McCoy handles a Revolver and a Derringer. Just like all the other weapons that made it to the second game, it has no change in its appearance at all. In both games, the Revolver is a brown pistol that has a grey coating on the top.

I know what you're thinking. "Did I fire six shots or only five? Well, to tell you the truth, in all this excitement I kind of lost track myself. But being as this is the most powerful handgun in the world, and would blow your head clean off, you've got to ask yourself one question: "Do I feel lucky?" Well, do ya, punk?

A revolver on the ground

The image that appears when revolvers are mastered. 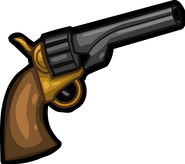 Add a photo to this gallery
Retrieved from "https://cactusmccoy.fandom.com/wiki/Revolver?oldid=12005"
Community content is available under CC-BY-SA unless otherwise noted.