Scallywags are a specific kind of Enemigo that mostly appear at the end of Gridlock Canal, the 9th area of Cactus McCoy 2: The Ruins of Calavera. Like the other Enemigos that appear after the 6th area, they are more resistant than the ones that appear in the earlier areas.

Thirteen more appear in Whiplash Rapids, as part of the Rumble in the Jungle challenge.

The ones in Gridlock Canal use Cannon, Cutlass, Meat hooks, Fuse bomb, Punches, parrots, crates, anchors, and chickens but if you carry them away to attack Cactus McCoy. The ones in Whiplash Rapids can wield an anchor, tow chain, morningstar, or crossbow.

Although scallywags have different outfits for the level theme, they all wear a black hat with a skull and crossbones. They also wear purple bandannas, and have brown medium-sized beards, and brown mustaches.

The Scallywags are a fierce group of marauding pirates. Many years ago, they seized control of the bustling Gridlock Canal. The Scallywags have become quite a burden to ships and traders since they started demanding high tariffs on all goods moving through the canalway. People who fail to pay the Scallywag tax will find themselves at the unwelcoming end of a loose cannon. 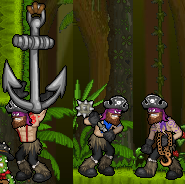 Another Scallywag in Whiplash Rapids.

Add a photo to this gallery

Retrieved from "https://cactusmccoy.fandom.com/wiki/Scallywags?oldid=12429"
Community content is available under CC-BY-SA unless otherwise noted.