The Serpent Blade is a swinging weapon that has appeared in only Cactus McCoy 2 so far. It is also the weapon of Malana Mire, the main antagonist of the same game, making it one of the rare unlockable weapons. Serpent Blade can only be unlocked as a starting weapon by beating the game with 100% (which means all challenges are achieved, all treasures are found, all weapons are mastered and all badges are acquired).

Another reason for it being unlockable is that it is powerful enough to kill all types of Enemigos in one hit (even the punching ones) and defeat the bosses just in a few swings. When calculated by the number of hits it takes to be completely consumed, it can be said that Serpent Blade has an energy level of 91, which is higher than any other weapon in both games, except Hatfield's Pistol in Cactus McCoy and the Curse of Thorns and the Gatling Gun 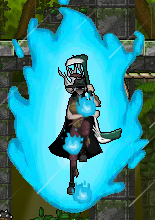 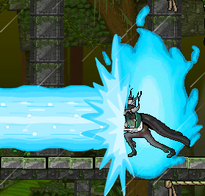 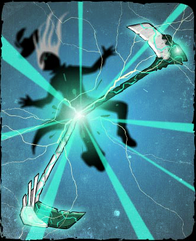 Add a photo to this gallery
Retrieved from "https://cactusmccoy.fandom.com/wiki/Serpent_Blade?oldid=12305"
Community content is available under CC-BY-SA unless otherwise noted.